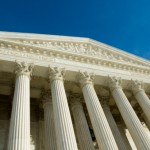 The Supreme Court issued its opinion in King v. Burwell, holding that the Internal Revenue Service (IRS) may issue regulations to extend tax-credit subsidies to coverage purchased through Exchanges established by the federal government under the Patient Protection and Affordable Care Act (ACA). The six-to-three opinion was authored by Chief Justice John Roberts, who was joined by Justices Kennedy, Ginsburg, Breyer, Sotomayor, and Kagan. Justice Scalia dissented, and was joined by Justices Thomas and Alito.

The case involved four Virginia plaintiffs who challenged the IRS ruling that individuals are eligible for the premium subsidy regardless of whether their state has a state-run or federally-run Marketplace or Exchange. The plaintiffs did not wish to purchase health insurance, and would have been required to with the availability of premium tax credits. They contended that Section 36B, by its plain language, only allowed premium subsidies for insurance purchased on Exchanges created by “states.” Since Virginia has a federally-run Exchange, plaintiffs claimed that they were not eligible for premium subsidies, rendering insurance unaffordable to them and exempting them from the ACA’s requirement to purchase coverage.

Chief Justice Roberts, writing for the majority, boiled the case down to the question of “whether the Act’s tax credits are available in States that have a Federal Exchange.” The opinion begins by describing the ACA’s (or “the Act” as it is referred to in the opinion) three key reforms: (1) guaranteed coverage and community rating; (2) the individual mandate or the requirement for all Americans to maintain health insurance; and (3) making insurance affordable by giving refundable tax credits to individuals with household incomes between 100 percent and 400 percent of the federal poverty level (FPL). “These three reforms are closely intertwined,” and Congress was clear that the first reform’s success (guaranteed coverage and community rating) was upheld by the coverage requirement, which in turn would only be successful with the tax credits. This is because without tax credits, the cost of buying insurance would exceed 8 percent of income for a large number of Americans, exempting them from the coverage requirement. The Court ruled that the intertwined importance of the three was underscored by their uniform effective date of January 1, 2014.

To reach its decision, the Court declined to follow the two-step framework of Chevron USA v. Natural Resources Defense Council, that provides the Court a process to analyze an agency’s (in this case, the IRS) interpretation of a statute. Noting that this case falls under the exception of “extraordinary cases” the Court instead tasked itself with determining the correct interpretation of Section 36B. With that task in mind, Chief Justice Roberts noted it was the Court’s duty to “construe statutes, not isolated provisions.”

With a thorough look at the language in Section 18041 of the ACA, definitions provided by the ACA, and language in Section 18031 of the ACA, the Court could not conclude that the phrase “an Exchange established by the State” is unambiguous. As a result, the Court was forced to turn to the broader section of the ACA in order to determine the meaning of Section 36B. In its review of the language, Chief Justice Roberts wrote that “The Affordable Care Act contains more than just a few examples of inartful drafting” and provided the example that it contained three separate section 1563s. Chief Justice Roberts noted that Congress wrote key parts of the Act behind closed doors, rather than through a more traditional process, Congress used the reconciliation process to limit opportunities for debate and amendment, and “as a result, the Act does not reflect the type of care and deliberation that one might expect of such significant legislation.”

When turning to the broader structure of the Act, the Court held “the statutory scheme compels us to reject petitioner’s interpretation because it would destabilize the individual insurance market in any State with a Federal Exchange and likely create the very ‘death spirals’ that Congress designed the Act to avoid.” To follow the petitioner’s (or plaintiff’s) interpretation would lead to the removal of tax credits, which would then render the coverage requirement meaningless. With 87 percent of individuals purchasing insurance on the Exchange with help from subsidies, the impact would not be small. Citing Justice Scalia’s dissent in the cornerstone ACA case National Federation of Independent Business v. Sebelius, the Court held it was implausible for Congress to operate the ACA in this manner, as “without federal subsidies… the exchange would not operate as Congress intended and may not operate at all.”

The Court also considered, but rejected, the plaintiff’s argument that Congress was “not worried” about the effects of withholding tax subsidies from states who chose not to operate an Exchange because “Congress evidently believed it was offering the states a deal they would not refuse.” The Court disagreed, holding that by setting up a federal fallback in case a state opted out of operating its own Exchange, “it expressly addressed what would happen if a state did refuse the deal.”

Finally, the Court held that the structure of Section 36B suggests that tax credits are not limited to state Exchanges due to its definition of “applicable taxpayer.” Relying on a previous holding that Congress “does not alter the fundamental details of a regulatory scheme in vague terms or ancillary provisions,” the Court concluded that Congress “would not have used such a winding path of connect-the-dots provisions about the amount of the credit.”

Affirming the 4th Circuit’s decision, the Court held that “Congress passed the Affordable Care Act to improve health insurance markets, not destroy them. If at all possible, we must interpret the Act in a way that is consistent with the former, and avoids the latter. Section 36B can fairly be read consistent with what we see as Congress’s plan, and that is the reading we adopt.”

Finding that “words no longer have meaning if an Exchange that is not established by the State is ‘established by the State’,” Justice Scalia went on to find that “the normal rules of interpretation seem always to yield to the overriding principle of the present Court: The Affordable Care Act must be saved.”

Holding that Congress knew how to equate two different types of Exchanges when it wanted to do so, and accusing the majority of engaging in “interpretive jiggery-pokery” Justice Scalia writes that although it might not make sense to only allow tax credits to those on state Exchanges, the result would be odd, not ambiguous.

Recognizing that mismatches often occur when lawmakers draft a single provision to cover diverse or different types of situations, Justice Scalia further disagreed that the structure of Section 36B provides support for tax credits for those on the federal Exchange, noting that many individuals are eligible for various tax credits at the outset only to later be provided a credit amount of zero due to income thresholds. Justice Scalia cited the child tax credit, the earned-income tax credit, and the first-time homebuyer tax credit as examples.

Again rejecting the Court’s reasoning in the earlier case (in which he dissented) National Federation of Independent Business v Sebelius, Justice Scalia noted “we should start calling this law SCOTUScare,” and in conclusion held that the majority opinion shows the “discouraging truth that the Supreme Court of the United States favors some laws over others, and is prepared to do whatever it takes to uphold and assist its favorites.”